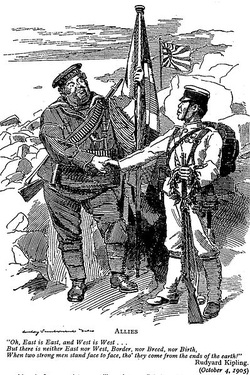 Source A: Cartoon from The New Punch Library volume 1, page 44, published in London in 1932. First published on 4 October 1905. Includes a poem by Rudyard Kipling


Q1. What can a historian learn from this source about how the Japanese were seen by 1905?

Source B: extracts from The Death Trap by a novel by r.W.Cole 1907

Q2. How are the Japanese portrayed in these extracts from 'The Death Trap'?
Q3. What does this novel suggest about the significance of Japanese victory in the Russo-Japanese War?